The 90th UP Vanguard Convention and UPROTC Centennial HomecomingUPROTC Centennial Celebration - A Salute to 100 Years of UPROTC: Duty Well-Performed, Honor Untarnished, & Country Above Self

About 500 U.P. Vanguards and graduates of Basic UPROTC flocked to UP Diliman to celebrate the UPROTC Centennial on Saturday, March 17, 2012. The special occasion commemorating the inception of military training in the university in 1912 was aptly themed: “A Salute to 100 Years of Duty Well-Performed; Honor Untarnished; and Country Above Self”. The mood was festive for the whole campus which was decked with colorful streamers, buntings and event markers. Special “ikot-toki” Jeepneys festooned with centennial tarpaulins conveyed guests to various event venues. Early birds had the opportunity to visit the UP Department of Military Science and Tactics Complex for the Open Barracks & Military Static Display.

The actual festivities kicked off in the afternoon with the U.P. Vanguard Annual Convention at the Malcolm Hall (College of Law) Auditorium where National Commander Jimmy Delos Santos and Treasurer Brod Norman Biola delivered their respective reports. Brod Edwin Fernandez of Class ’70 gave a special talk about enhancing the UP ROTC Program with the establishment of an institute which may be dedicated to advanced studies in leadership and security. Bonafide members discussed other organizational matters and cast their votes as well for the new Board of Governors.
The convention was followed by the traditional “Heritage March” towards the Gen. Antonio Luna Parade Ground also known as the Sunken Garden. Arrival Honors rendered by the prestigious UP Rayadillo Honor Guard Company and the Philippine Army Band then took place in front of the Grandstand to welcome the Guests of Honor, UP President Alfredo Pascual and Department of National Defense Undersecretary for Civil, Veterans & Reserve Affairs Eduardo Batac.

Guests proceeded shortly to the grandstand for the “Skills and Capabilities Demonstration” which showcased UPROTC Cadets’ proficiency in martial arts, rescue and small unit tactics.

The UPROTC Centennial Parade and Review commenced soon after. It was executed by the composite UP Diliman and UP Los Banos Corps of Cadets. The parade was highlighted by the nostalgic “trooping the line” where Vanguards and UPROTC alumni had the chance to march the hallowed parade grounds yet again for a closer view of the decorous cadets.

Guests also witnessed for the first time a simultaneous turnover of command from the UP Diliman and UP Los Banos outgoing Corps Commanders to their respective successors.

After the parade, Vanguards and UPROTC Graduates lit torches to set in motion another time honored tradition – the “Torch Walk“. Like hundreds of fireflies of the Old Balara, they trudged to the UP Oblation Plaza for the U.P. Vanguard Memorial Rites.

In front of the revered Oblation, Chairman Gilbert Reyes and National Commander Jimmy Delos Santos installed into the “Hall of Fame” Brigadier General Ruben Maglaya from the Class of 1937. He served with distinction as Commanding General of the entire Philippine Army exemplifying the characteristics of a true Vanguard. His son, Col. Manuel Maglaya, gave an emotional response to the tribute in behalf of the Maglaya family. Attendees also paid homage to the dearly departed Vanguards by sounding the ceremonial gong, offering floral sprays and setting ablaze the Centennial Cauldron ahead of the customary martial ruffles, flourishes, taps and rifle volleys.

The program started with the invocation led by Vanguard priest, Father Carmelo Diola of Class ’79. The prayer was followed by a soulful rendition of “Our Father” by soprano Karla Gutierrez, Corps Sponsor ’91. Vanguards and UPROTC Alumni proudly sang the Philippine National Anthem “Lupang Hinirang” as the colors were ushered in by drum rolls and the rumbling timpani. Afterwards, the orchestra and chorus performed the rousing “O Fortuna” by Carl Orff along with synoptic video of UPROTC’s milestones.

The welcome speech of Jimmy Delos Santos gave emphasis to the UPROTC’s rich history and numerous contributions to the nation. Underscoring the last two lines of the university hymn “…humayo’t itanghal giting at tapang”, the National Commander invited all attendees to sing “UP Naming Mahal” in honor of all the gallant and courageous Vanguards who served our land. While spirits were high, the candidates for membership in the UP Vanguard were called upon for the induction ceremony. From the Class of 2012, the inductees were: Ryan Kristofer Arana, Gelline Vargas, Geneveive Landong, Jatniel Canar, Virginia Ariñas, Mark Gerald Cuadra, Jason Dominic Calora and Cris Reshon Guiral. The inductees for associate membership were Reynaldo Nograles, integrated into the Class of 1963; Atty Peter Joey Usita and Greg Villanueva both integrated into the Class of 1987 and Rufino Siwa integrated into the Class of 1990.

The ritual was simple but meaningful. Inductees were challenged by Chairman Gilbert Reyes one by one to dedicate their lives to the shibboleths of the Corps. On their knees they contemplated while the orchestra and chorus solemnly performed the “Ode to the Shibboleths“. As soon as the inductees were ready to commit, they stood up and were sworn in as Vanguards. And then the UP Vanguard Hymn was played as elder Vanguards approached the new members to embrace them into the brotherhood.

The merry Vanguard song “Dito Man, Doon Din” then started playing as brods went around the hall to warmly greet each other in the unique fraternal fashion of the “Brotherhood Round“.

Dinner was served on round tables decorated with maroon and green ribbon runners, candles, floral arrangements and accented with custom-made bottles of “UPROTC Centennial Wine“.

The climax of the night was the key note speech of somebody who is known to the Vanguards as the living legend, MGen Jose P. Magno. He narrated how Vanguards served in the past and gave prescriptions on how their legacy should be propagated for future generations.

Alumni sponsors were also honored fittingly with a floral and musical tribute as emcee Brod Ernie Reyes of Class ’80 asserted that the history of the UPROTC will never be complete without them.

Further into the night, the U.P. Vanguard presented its annual awards. The Achievement Award was given to Col Peale Jon Bondoc ’95 for his meritorious achievements in military service. The Annual UPLB Balik Barracks Project won the Outstanding Chapter Award.

From Class 1972, the Ruby Jubilarians were Mariano Angeles, Edgardo Fernandez, Maximino Montenegro of UP Diliman and from UP Los Baños, Edgardo Lantican.

Another highlight of the program was the performance of the “UPROTC Centennial Anthem” especially composed for the occasion by Leo Quinitio and performed by the UPROTC Centennial Orchestra and Chorus.

To cap the festivities, Chairman Gilbert Reyes delivered his closing remarks by challenging the Vanguards to unite in creating ways to ensure that future generations are given the same training, the same sense of patriotism evoked by the Shibboleths and the same chance to serve our nation.

In closing he ordered all Vanguards to rise and acknowledge the entrance “symbolic Class of the future UPROTC” composed of children of U.P. Vanguards who smartly marched up the stage in full Rayadillo regalia. Vanguards rendered a snappy salute as a tribute to the future, and the children in uniform rendered their snappy salute in response.

This was the cue for the orchestra and chorus to play Orff’s “Ave Formosissima” and also the cue for 100 giant sky lanterns to be launched from the amphitheater. 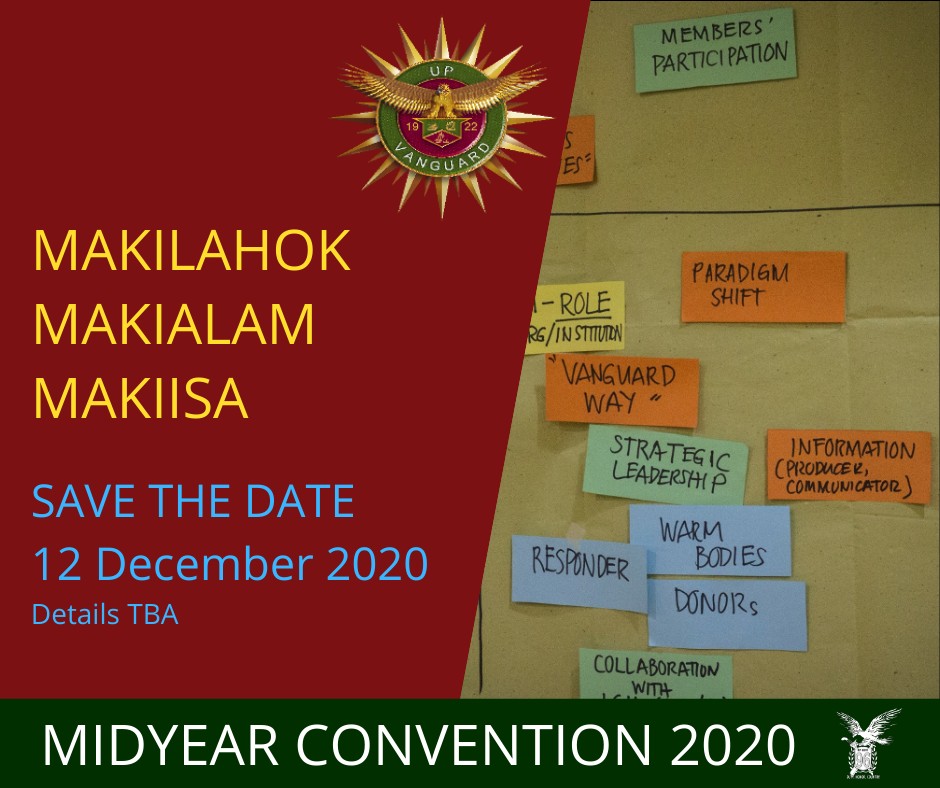