UP President Alfredo E. Pascual received the Oblation Award of the UP Vanguard during its 93rd Alumni homecoming and convention on May 9 at the UP Department of Military Science and Tactics quadrangle in Diliman, in the presence of National Commander Vanguard Melito S. Salazar, Jr., Search and Awards Committee Chairman Vanguard Domingo Egon Q. Cayosa and Co-Chairman Vanguard Jaime S. De Los Santos. 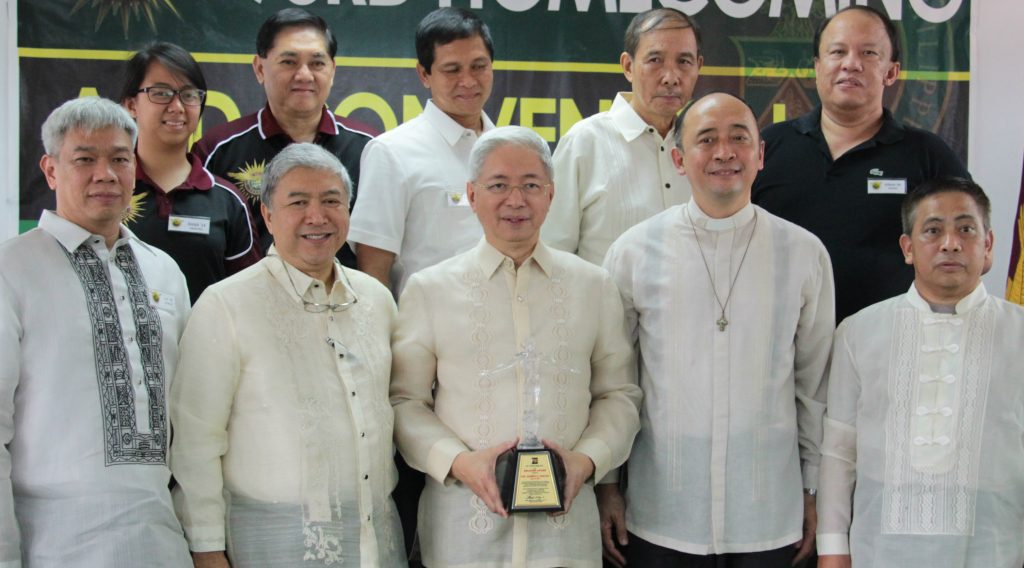 Since the 1970s, the Oblation Award has been given to a vanguard who “has shown honorable leadership, excellence, talent, integrity and hard work for many years that kept him ahead and above his peers in making a significant contribution to society, and an acknowledged and outstanding contribution or service to the organization,” according to Michaela Marteja of Class 2014 and current UP Vanguard Inc. executive director.

Receiving the Oblation trophy, Pres. Pascual of Class 1969 was honored for his “distinguished leadership and excellence in the field of academe; his character and integrity; and his acknowledged and outstanding contribution and service to the organization,” Marteja added.

“UP Vanguard: One Direction” was the theme of this year’s alumni homecoming and convention . The event gathered together graduates of the Advance ROTC Program of the University of the Philippines, as well as UP Vanguard alumni who are leaders and workers in business, government, academe and civil society today.

Included in the ceremony was the presentation of the Hall Of Fame Award to Vanguard Jesus Antonio Matamorosa Carpio ’53 who, according to Marteja, “joined the military service and top notched various military schooling in his career and has attained national/international prominence for his exemplary leadership, outstanding success as a lawyer, educator and an appointed Director of the National Bureau of Investigation showing patriotism and love for country by his human rights advocacy.”

Achievement Awards were also given to Jun Alcabasa, Jr. ’79 (Military), Carmelo Diola ’79 (Public Service), Ray Apostol ’85 (Geology), Andres Licaros ’79 (Management) and Danilo Cardenas ’73 (Agriculture). They were recognized for meritorious achievement in the practice of their professions.